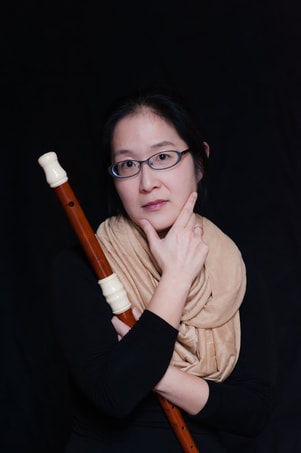 ​Teddie's first professional training was in classical music. She is fascinated by the timbre and vocal   qualities of the baroque traverso and specializes in historical flutes. Based in Germany, she collaborates with a variety of ensembles, playing repertoire ranging from 17th century airs de cour to 19th century symphonies. She has given workshops on historical performance at institutions such as the San Francisco Conservatory of Music, the School of Music at the University of Victoria BC, the Irish World Academy of Music and Dance at the University of Limerick, Tunghai University in Taiwan, and the Escuela Superior de Música(UNAM) in Mexico City. Teddie studied traverso with Wilbert Hazelzet and received her Master's degree in Historical Flute Performance from the Koninklijk Conservatorium Netherlands. She holds a Bachelor's degree in Music and Germanic Studies from Indiana University USA, where she studied modern flute with Kathryn Lukas and graduated with high distinction. She is a winner of the Baroque Flute Artist Competition held by the National Flute Association of America, and has also adjudicated for its competitions.

​In addition to music, Teddie is a photographer centered on portraiture for musicians and produces her signature multimedia art films. The challenge of expressing the essence of music and of musicians through a visual medium is a central concept in her photographic work. Teddie studied photography with the award-winning photojournalist David Bathgate, in addition to specialized focus on black-and-white photography with Memphis Barbree. She has participated in group exhibitions with the Wallauer Fachwerk e.V. in the Frankfurt area and also in Alsace, France. Most recently, Teddie has joined the team of instructors at The Compelling Image, an online photography school dedicated to one-on-one instruction and personal feedback. A member of the International Dark Sky Association, she has also found much inspiration through experiencing the night sky and the practice of astrophotography.

A language aficionado, Teddie is fluent in English, German, and Chinese. She also loves playing in the pitch of A=392 and finds the fisheye lens fascinating.